I was thinking of doing some more strimming, but it’s been too wet lately..

I have managed to get some more veg in including Beetroot, Chard and these young Romanesco Caulifowers..

What I might do next is put some netting up.. I have some old hosepipe I could use and was discussing it with my neighbour who has done this on his plot.

One thing that struck me about his plot, is that there is just one path down the side and the rest of it is pretty much all just earth..

which means he is utilising the space most productively, but also giving himself the maximum amount of work to have to do and keep on top of..

I’m also starting to learn the importance of keeping on top the weeds and most importantly hoeing weeds little and often. This can be illustrated by his neighbour who last month came down and spent the day digging up their plot..

They then put some Beans in, but I’m not sure they’ve been down much lately to hoe the rest of the grass/weeds which are now starting to come up..

I then planted out some Sweet Pea seeds so left the bed alone to let them grow. I also wasn’t sure what were Sweet Peas coming up so just let everything in the bed grow.. Then a couple of months later, the bed now looks like this

(I weeded that little bit the other day) Including lot’s of nasty looking Thistles like this..

Which I initially mistook for Globe Artichokes which actually look quite similar, such as these examples from a neighbour opposite.. 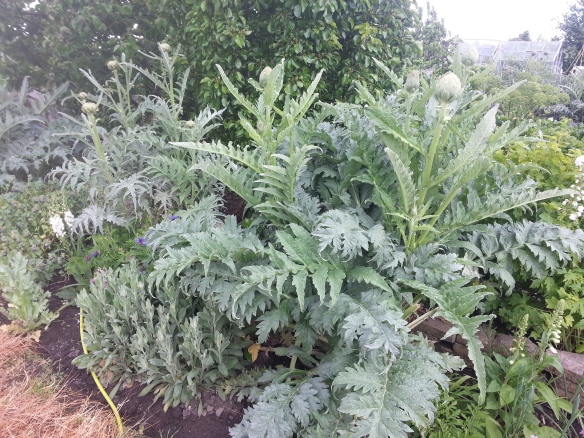 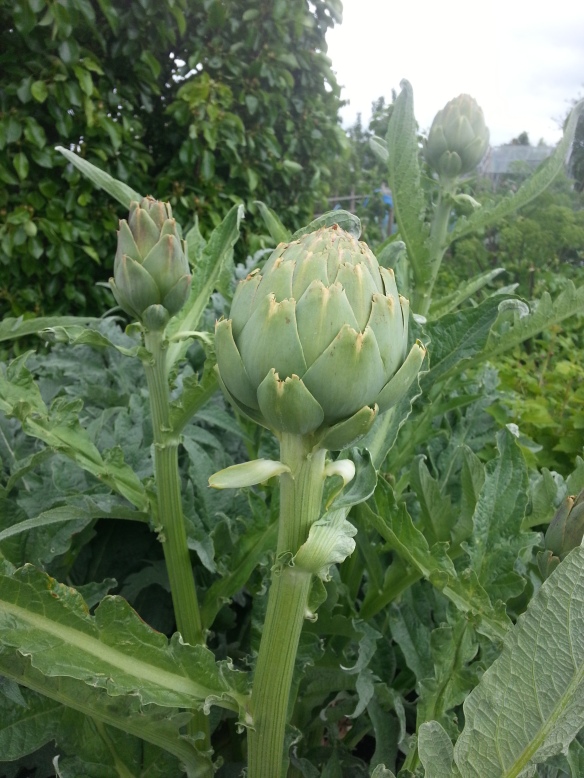 I’m also pleased to say that the Rhubarb Crown I replanted seems to be picking up again, possibly after I gave it some All Purpose Feed. It’s certainly looking a lot healthier anyway..